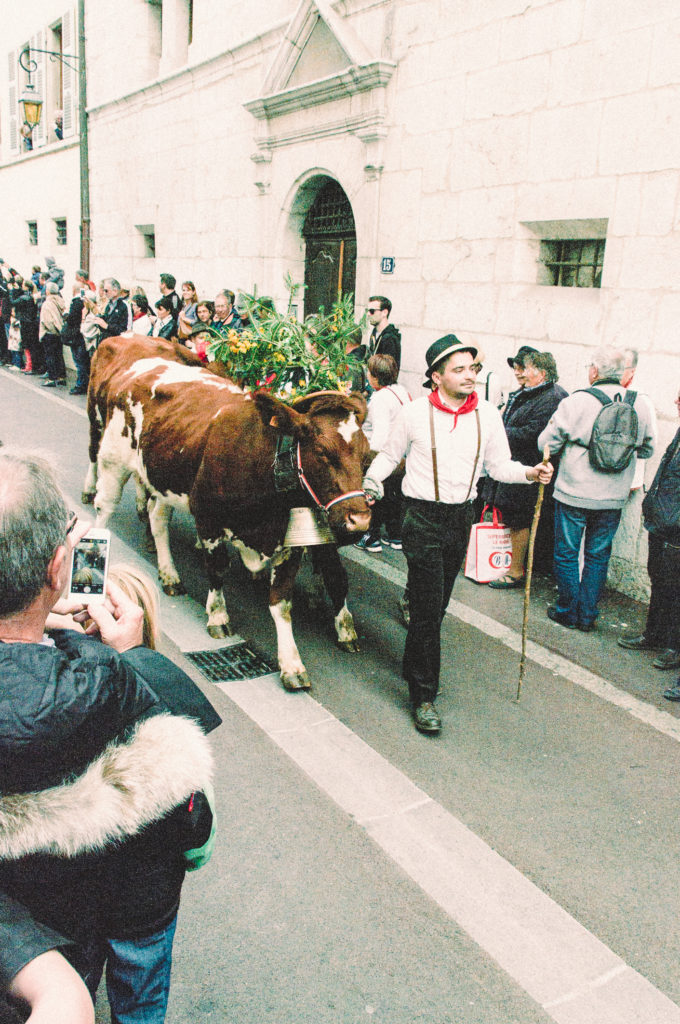 We were there the day the cows came home.

If you want the sentence above to make sense, I’m going to have to give you a little context.

Just recently, we spent a week in Annecy, a large city in France’s Haute-Savoie region which is located in the east of the country. Annecy is well known, popular with travellers and boasts one of the most spectacularly beautiful ‘old towns’ we have ever come across. It is no accident that Annecy is regularly featured on all of those ‘most beautiful villages in France’ pins you see on Pinterest.

On the Saturday we were there, Annecy’s inhabitants, people from the surrounding area and bus loads of tourists flocked into the old part of town to celebrate Retour des Alpages – a festival that welcomes the cows and other animals home after they have spent their summer in the alps.

The festival, which is held each year in early October, was full of things you’d expect from a celebration of this sort. Market stalls, balloon sellers delighting children with helium filled unicorns and dolphins, the scents of freshly cooked street food and the sparkling lights of carousels.

There were also activities that could only be considered distinctly local. Yodelling and traditional dance both performed by artists dressed in time-honoured costumes. The somewhat gruesome creation of saucisson on the street. Oh, and the parade where the cows came home. (It’s worth noting that the cows were accompanied by mountain dogs and a beribboned flock of geese, amongst many other things.)

There was a real carnival atmosphere. Extra staff manned the stores and restaurants. And bars everywhere were packed with families genuinely enjoying their day. There were more adults than children leaning out of windows, craning their necks to see the parade.

The joy and excitement in the crowd was infectious. You couldn’t help but smile.

Not Even The French Can Be Cool All The Time

As fun as they were though, the scenes we witnessed weren’t necessarily ones that you’d automatically associate with France. The festival was certainly unlike anything we’d ever experienced in our travels.

We are fed this idea that the French are endlessly cool. Or perhaps it’s an ideal. Either way, it is perpetuated by francophiles like me, the internet and Instagram. There is this perception that all French people are slim and good looking with fabulous hair and wardrobes. That they are excellent in bed and they can all cook. They have perfectly behaved children. And apparently they never do anything the slightest bit uncool.

In reality, it is a hard image for them to constantly live up to – and a tough one for the rest of us to aspire to. Especially when there is the fun of a traditional local festival to be had.

I was grateful for the reminder to be aware of my biases and to avoid stereotypes in my thinking. Not even the French can be cool all the time. And I’m ok with that.

Looking for more French inspiration? Then don’t miss the #AllAboutFrance Linkup over at the Lou Message Blog. Click this link and you’ll discover a diverse range of blog posts all about France.